NASA announced Wednesday it has selected Boeing and its industry team to lead the development and flight testing for a full-scale Transonic Truss-Braced Wing (TTBW) demonstrator airplane.

The Boeing Company was just awarded Sustainable Flight Department Accreditation by the NBAA on Tuesday. This award is given to business aviation entities that are proven leaders in one or more of the four categories, flight, ground support, operations and infrastructure.

Advancing sustainable technology is crucial for reaching the industry goal to reach net zero carbon emissions by 2050. NASA, Boeing and other partners aim to cut fuel use and emissions by up to 30 percent in single-aisle airplanes.

Through the Funded Space Act Agreement, Boeing will work with NASA to build, test and fly the full-scale aircraft to validate new sustainable technologies aimed at lowering emissions. NASA will invest $425 million over seven years, while the company and partners will contribute to the remainder of the agreement funding, estimated to be around $725 million. Per the agreement, the agency will also contribute other resources like technical expertise and facilities.

The technology demonstrated through testing in the Sustainable Flight Demonstrator (SDF) program will inform other future designs. Sustainable testing could lead to other breakthrough ideas and fuel efficiency gains.

“The SFD program has the potential to make a major contribution toward a sustainable future,” said Greg Hyslop, Boeing chief engineer and executive vice president of Engineering, Test & Technology. “It represents an opportunity to design, build and fly a full-scale experimental plane while solving novel technical problems.”

Using ultrathin wings braced by struts with larger spans and higher-aspect ratios has the potential to eventually accommodate advanced propulsion systems that are limited by a lack of underwing space seen in today’s low-wing airplane configurations. Boeing will use elements from existing models and integrate them with new components for the demonstrator.

“It’s our goal that NASA’s partnership with Boeing to produce and test a full-scale demonstrator will help lead to future commercial airliners that are more fuel efficient, with benefits to the environment, the commercial aviation industry, and to passengers worldwide,” NASA Admin Bill Nelson said. “If we are successful, we may see these technologies in planes that the public takes to the skies in the 2030s.”

The TTBW airframe concept is a result of over a decade of development supported by NASA, Boeing and other industry investments. Previous NASA programs, including the Subsonic Ultra Green Aircraft Research program, have seen Boeing conduct extensive wind tunnel testing and digital modeling to advance the design of the TTBW. Early studies began under NASA’s Environmentally Responsible Aviation Program. 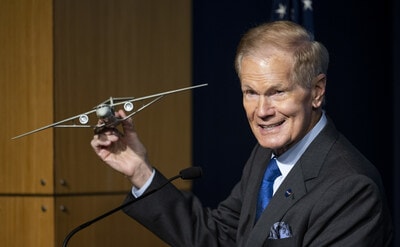 The design of the TTBW will result in a more fuel-efficient aircraft than traditional airliners, due to the shape creating less drag which burns less fuel as a result.

“NASA is working toward an ambitious goal of developing game-changing technologies to reduce aviation energy use and emissions over the coming decades toward an aviation community goal of net-zero carbon emissions by 2050,” said Bob Pearce, NASA associate administrator for the Aeronautics Research Mission Directorate.

“The Transonic Truss-Braced Wing is the kind of transformative concept and investment we will need to meet those challenges and, critically, the technologies demonstrated in this project have a clear and viable path to informing the next generation of single-aisle aircraft, benefiting everyone that uses the air transportation system,” Pearce said.

NASA’s goal is to have the technology that will be flown on the demonstrator, when combined with advancements in the propulsion systems, systems architecture and materials, resulting in up to a 30 percent fuel consumption and emission reduction, relative to today’s most efficient single-aisle aircraft. This reduction will also depend on the aircraft mission.

The organization has also worked with Boeing and other industry partners on the TTBW and other advanced sustainable aviation concepts.

“Boeing has been advancing a multipronged sustainability strategy, including fleet renewal, operational efficiency, renewable energy, and advanced technologies to support the U.S. Aviation Climate Action Plan and meet the industry objective of net zero carbon emissions by 2050,” Citron said. “The Sustainable Flight Demonstrator builds on more than a decade of NASA, Boeing, and our industry partners’ investments to help achieve these objectives.”

With the new Funded Space Act agreement, NASA can capitalize on private industry knowledge and experience. While Boeing and its partners lay out the technical plan, NASA will provide access to its facilities and expertise. The organization will not obtain any other aircraft or hardware for its missions. NASA will be able to get access to certain ground and flight data, which can be used to validate the airframe configuration and associated technologies.

This project is key in NASA’s Integrated Aviation Systems Program and the Sustainable Flight National Partnership. The success of this project is also critical to the sustainable industry-wide goal.

New Orleans lost its bike share. Residents stepped up to rebuild it.