EAA celebrates 70 year history and impact on aviation this month

Photos from the EAA

The experimental aircraft association (EAA) is celebrating its 70th anniversary on Jan. 26, 2023.

The EAA is based n Oshkosh, Wisconsin and in its 70 years has grown to have over 250,000 members and about 1,000 chapters worldwide. It also hosts the EAA AirVenture Oshkosh yearly.

History of the EAA 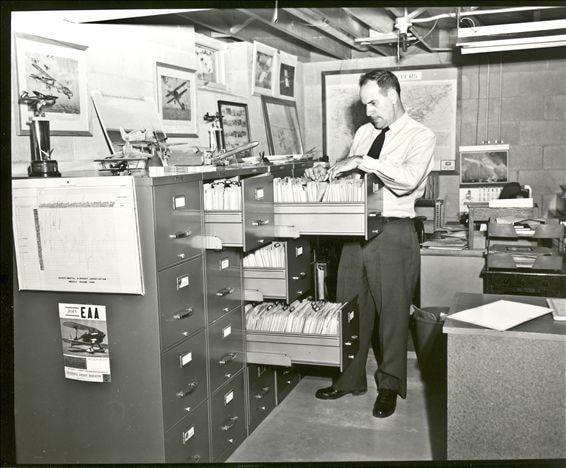 Paul Poberezny in the first headquarters in his basement in 1955

Founded in 1953 by veteran aviator Paul Poberezny, the organization began as a flying club. A small group of aviation enthusiasts gathered at Poberezny’s home and founded the group, electing him the first president. On Jan. 26, 1953, the official first meeting was held at Curtiss-Wright (Timmerman) Field in Milwaukee, Wisconsin.

The original goal of the group was to aid and assist amateur aircraft builders and quickly became a promotion for recreational aviation and the promotion of aviation safety.

In February 1953, the first EAA newsletter, The Experimenter, was published. It started out being typed out and mimeographed in Poberezny’s basement and evolved into Sport Aviation, an EAA flagship publication. The first annual EAA Fly-In Convention was held in September 1953 and 21 aircraft and about 150 people attended.

In October 1953, member Ray Stits asked to start a chapter in Riverside, California. EAA Chapter 1 became the first of 1,000 worldwide. By 1954, the EAA was featured in FLYING magazine and MECHANIX ILLUSTRATED which drew attention to the group. 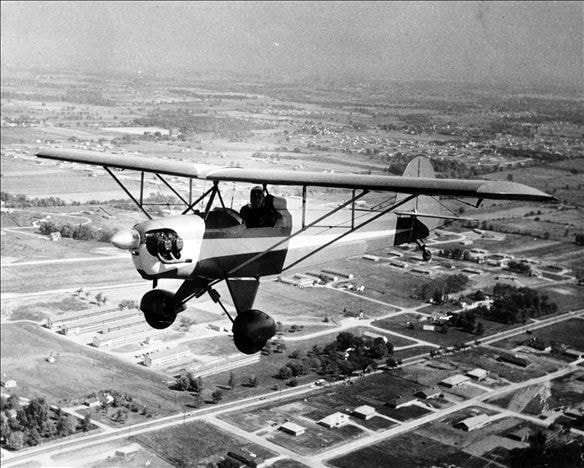 MECHANIX ILLUSTRATED featured a series of articles on the construction of the “Baby Ace” airplane from May through July 1955. Poberezny had modified the original design of the Corben Baby Ace. These articles helped to boost interest in the EAA.

The end of the 50s saw the first issue of Sport Aviation go out in January 1958 and a new site for the growing EAA Fly-In Convention.

In the early 1960s, the EAA expanded. In April 1962 the EAA Air Museum Foundation was incorporated to permit tax-deductible donations. It later went on to develop the world’s largest private collection of aircraft and aviation-related artifacts.

By August 1964, the group moved out of Poberezny’s basement and into a new building in Franklin, Wisconsin. They outgrew this office by December 1966 and a new Museum, office complex and restoration facility were added to the site. As the 60s neared an end, the annual convention was moved from Rockford, Illinois to Oshkosh, Wisconsin, where it is still held today. 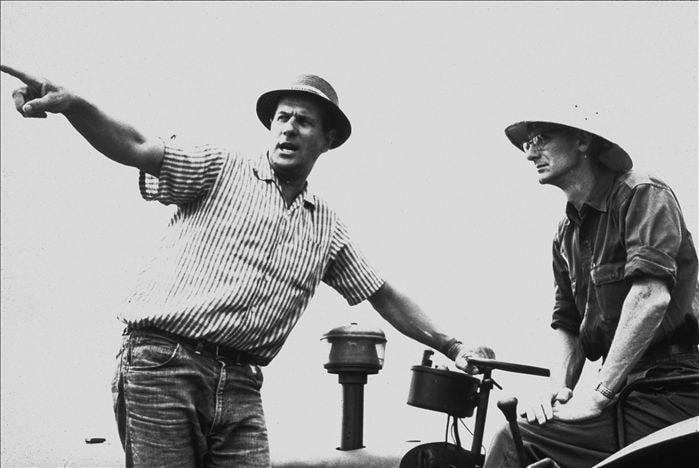 In the 1970s the EAA established divisions like the Warbirds of America and Vintage Aircraft Association. In August 1976, Tom Poberezny, the son of the founder, was named the chairman of the EAA Fly-In Convention and Sport Aviation Exhibition. The 1976 convention was where John Moody displayed his powered hang glider for the first time.

In 1977 and 1978 the EAA tried to rekindle the country’s love for aviation with replications. In 1977, the EAA rebuilt an accurate reproduction of The Spirit of St. Louis on the anniversary o Charles Lindbergh’s solo Atlantic flight. In 1978 an exact replica of Orville and Wilbur Wright’s “Flyer” was commissioned and constructed by students at Blackhawk Technical School. The “Flyer” replica became a centerpiece at the EAA Aviation Foundation’s Museum. 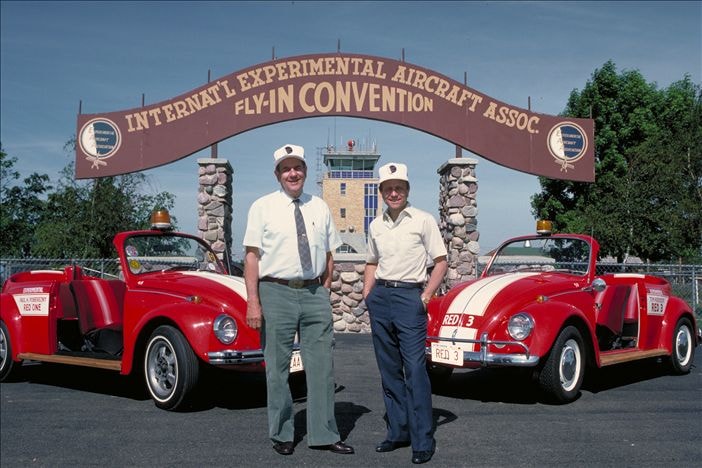 The EAA established the first ultralight organization in 1981 with the formation of the EAA Ultralight Association. Petitions to the FAA for an exemption to the FAR Part 103 governing Ultralight operations were successful in June 1983. This exemption permitted flight training in two-place ultralights. By 1986 the organization was consolidated into the general EAA.

In August 1982 construction began on the EAA Aviation Center in Oshkosh one year later the center was dedicated. The facility is 100,000 square feet and includes the international headquarters for the EAA and the EAA Aviation Foundation. It also featured an EAA Air Adventure Museum.

In January 1984 the EAA announced the start of the educational Air Academy for young people 15-17. The EAA continues to inspire the youth into a love for aviation and help inspire them to start a career in the industry.

The EAA Air Museum became the home for the foundation’s Spirit of St. Louis replica in October 1986. It then became the first aviation-only museum in the U.S. to receive accreditation from the American Association of Museums. The replica was taken out of retirement in May 1987 and arrived in Paris to re-enact Charles Lindbergh’s landing at LeBourget Field on the 60th anniversary of the solo flight. 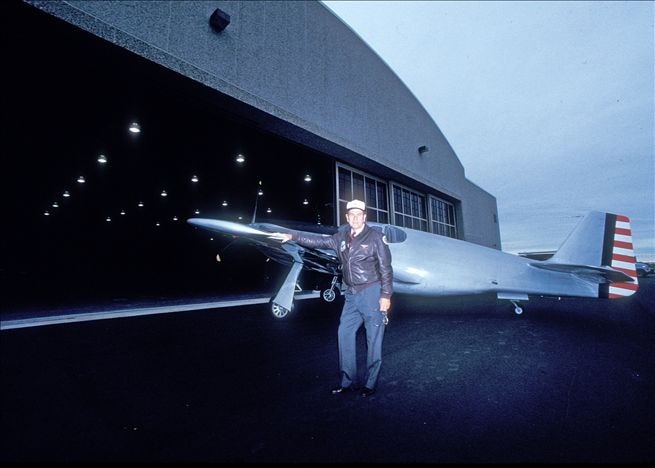 In 1989, Poberezny announced his resignation as EAA President after 37 years. Four months later he was elected to a new EAA Chairman of the Board position. His son was then elected by members to serve as the new president. 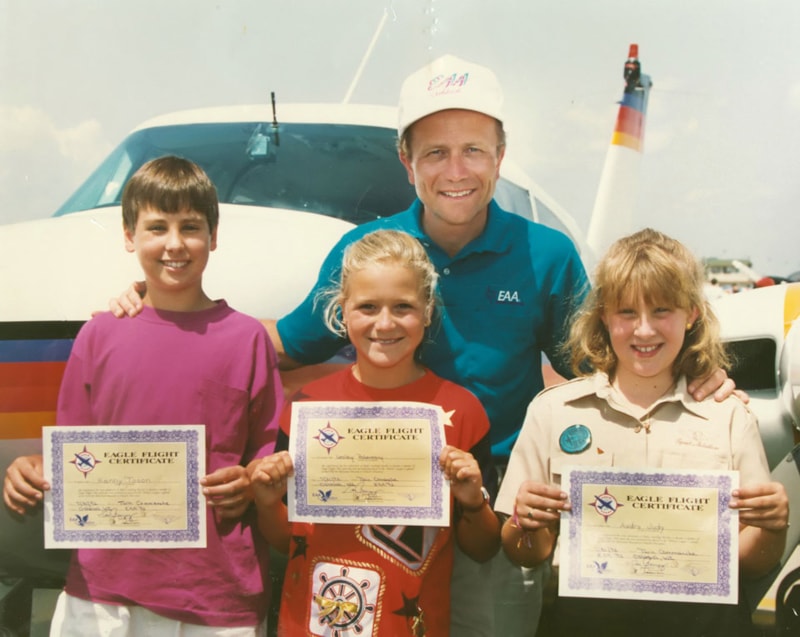 Tom Poberezny after the inaugural Young Eagles flights at Oshkosh on July 31, 1992

In September 1991, the FAA approved the changes in the two-seat ultralight training exemptions proposed by the EAA. These new rules affected a large number of ultralights being used for both training and recreational flight. In 1992 the FAA adopted another recommendation from the EAA, adopting the European Joint Aviation Requirements- Very Light Airplanes as equal to the American Federal Aviation Regulations to determine the compliance of a light aircraft.

In continuation with the EAA’s efforts to inspire young people, the EAA founded the Young Eagles program in May 1992. The first flight in the program occurred at the annual convention in July.

There was more debate and lobbying with the FAA through the 90s. September 1992 saw the EAA’s proposal for a Primary Aircraft Category established by the FAA. In April 1997, the EAA successfully lobbied the FAA into decreasing restrictions on the recreational pilots license.

In May 1998, the EAA Air Academy Lodge is completed, serving over 1,000 young people each year during EAA educational sessions.

In October 1997, the EAA helped the nation to understand how amateur-built aircraft after entertainer John Denver is killed in a homebuilt aircraft accident. The EAA responded to over 250 national media inquiries. Then in 1999, the Homebuilt Aircraft Council was established. 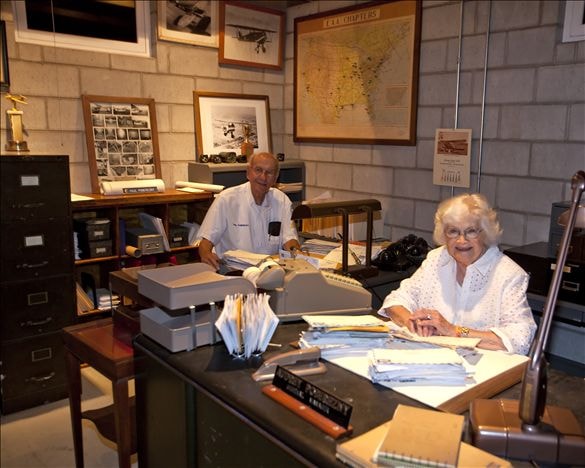 After the tragic events in September 2001, the EAA helped to defend general aviation. The organization used connections and contacts within the federal government to reopen the national airspace and prevent unreasonable restrictions on private flying. In October 2001, Poberezny, the EAA president at the time testified before the House Aviation Subcommittee about the return of general aviation after the events of September.

In October 2003, nearly 35,000 volunteers helped the EAA reach the goal for the Young Eagles program, flying the 1,000,000th Young Eagle and subsequently announcing the plan to continue the program as a permanent part of the EAA.

The 2000s saw the EAA making changes for general aviation with breakthroughs like simplifying medical certification and the celebration of the 100th anniversary of the Wright’s first flight at Kitty Hawk, North Carolina.

In March 2009, the founder and president Paul Poberezny stepped down as chairman of the board, a role he had served since 1989. His son Tom Poberezny took his place and announced the search for his successor. A Founders Wing was dedicated at the AirVenture Museum, showcasing a re-creation of the original office in Poberezny’s home. 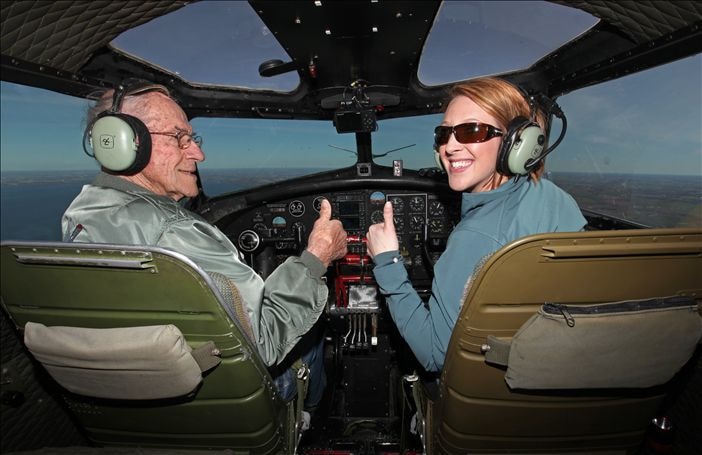 Longtime EAA member and pilot, Rod Hightower, was named EAA’s new President and CEO in July 2010. He resigned later in October 2012. In January 2011, the EAA was named as one of the five general aviation associations named to the FAA’s GA Joint Steering Committee to form policy for general aviation nationally.

Chairman Poberezny announced his retirement at AirVenture in July 2011 and was named to the new position of Chairman Emeritus. One year later, the Eagle Flights program made its first flight, launching the program meant to get adults involved in aviation.

On Aug. 22, 2013, EAA founder Paul Poberezny died at age 91. His death came a few days after he was named in FLYING magazine’s “51 Heroes of Aviation” amongst Charles Lindbergh and Neil Armstrong.

The EAA continued to be instrumental in making changes in the industry and attendance soared at the annual AirVenture. After a 25-year effort by the EAA and other GA groups, President Obama signed an FAA funding extension that included third-class medical certification reform, in July 2016. Actor and former Young Eagle Chairman Harrison Ford flew the two millionth Young Eagle at Airventure.

Triumphs continued throughout the 2010s with AirVenture attendance surpassing 642,000 at the 50th consecutive EAA Fly-In Convention in July 2019 and the EAA Aviation Museum being named one of the World’s Top 20 Aviation Museums by CNN.

The 2020 pandemic saw several EAA events impacted. Aircraft tours and aviation events were canceled, causing EAA webinar attendance to jump. EAA AirVenture was canceled for the first time because of uncertainty about the pandemic.

In April 2021, the groundbreaking was held for a 30,000-square-foot expansion to the EAA Aviation Center. This included a Pilot Proficiency Center and a Youth Education Center, which opened in July 2022.

AirVenture returned to Oshkosh in 2021 with numbers almost as high as they were before the pandemic, featuring a record 3,176 show planes. In November of that year, membership reached over 250,000 with a record number of annual and lifetime members.

A look at a record-setting EAA AirVenture by the numbers

In February 2022, the EAA and FAA joined other aviation groups to form the Eliminate Aviation Gasoline Lead Emissions (EAGLE) Initiative. This was a plan to transition piston-engine aircraft to lead-free aviation fuels by the industry goal of 2030.

The Fly-In Convention has become the world’s largest recreational aviation gathering. The EAA continues to work to improve aviation safety and inspire the youth with flight.

This year AirVenture will be held from July 24 through July 30.