A study of vegetation across New York City and some densely populated adjoining areas has found that on many summer days, photosynthesis by trees and grasses absorbs all the carbon emissions produced by cars, trucks and buses, and then some. The surprising result, based on new hyper-local vegetation maps, points to the underappreciated importance of urban greenery in the carbon cycle. The study was just published in the journal Environmental Research Letters.

Using fine-grained vegetation maps, the researchers documented large amounts of previously unrecognized greenery scattered in small spots even in highly developed areas, and found it is performing an outsize role in the exchange of atmospheric gases. They reached their conclusions by modeling carbon uptake of every bit of lawn and tree canopy, and studying data from instrument towers that measure the air’s carbon dioxide content on a continuous basis.

The findings are significant because urban areas account for more than 70 percent of human carbon dioxide emissions; New York City is the United States’ number one emitter, and third largest in the world. 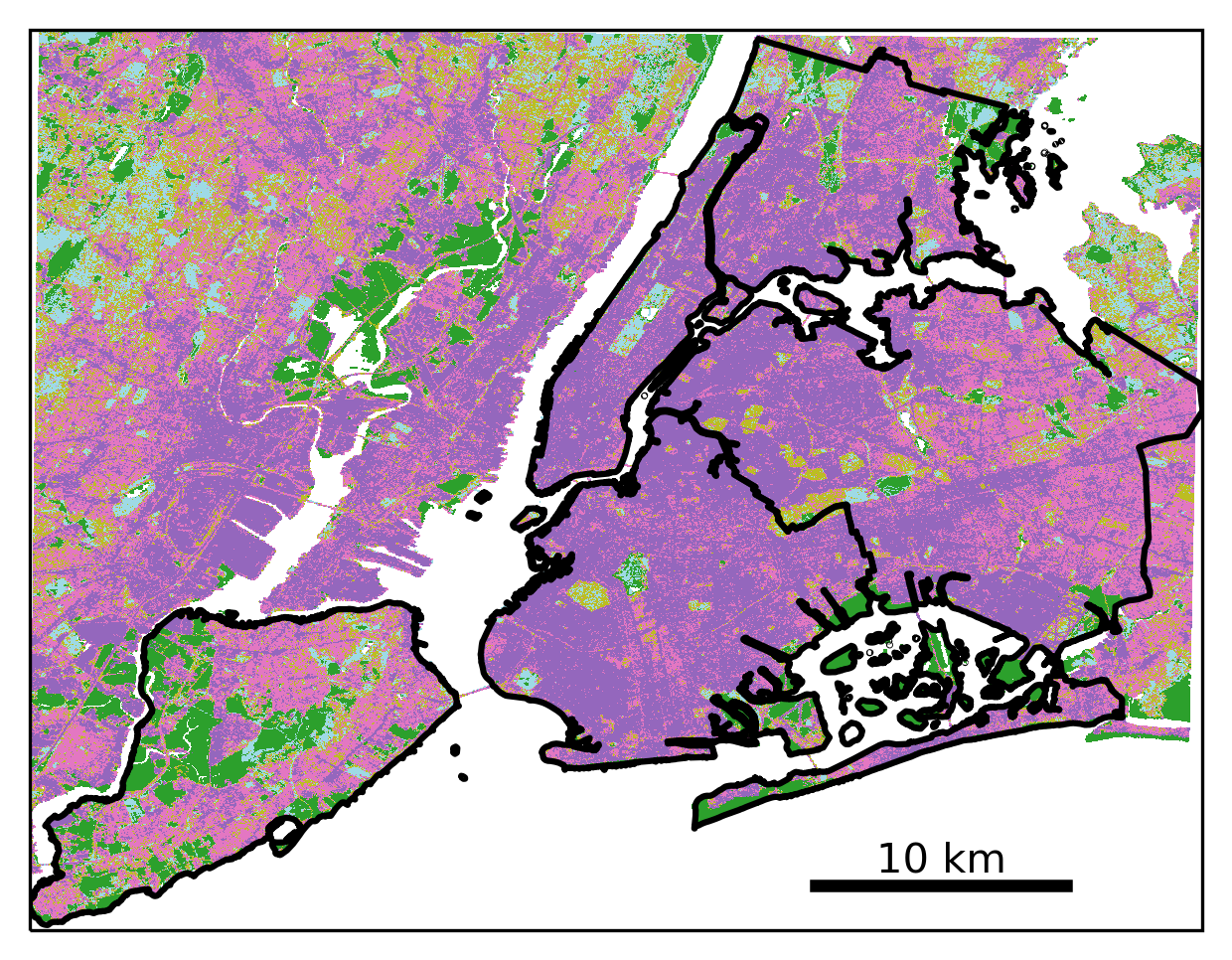 Researchers studied carbon uptake by vegetation in New York City and parts of the surrounding area. Greens show areas of contiguous forest, marsh or grassland. The rest is developed, with purple areas at highest intensity, but a surprising amount of vegetation is found there, too, along sidewalks, in backyards and other small features. (Wei et al., Environmental Research Letters 2022) 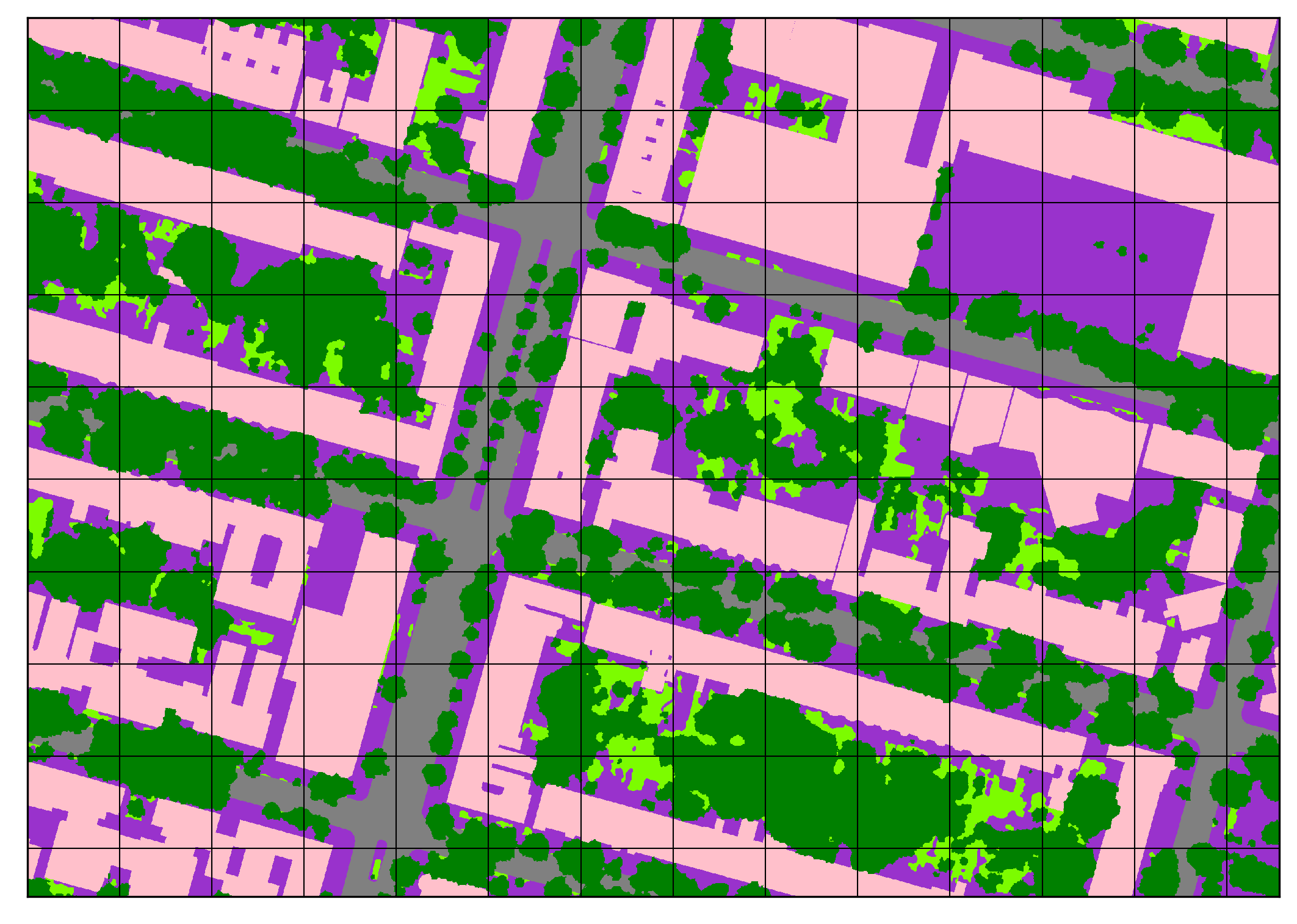 Zooming in on several completely built-up blocks in the Prospect Heights neighborhood of Brooklyn, pink areas are buildings; purple ones are paved surfaces including sidewalks and parking areas. In backyards and along the streets, dark greens signify tree canopy; light greens, shrubs or grass. (Wei et al., Environmental Research Letters 2022)

“There is a lot more greenery than we thought, and that’s what drives our conclusion,” said lead author Dandan Wei, a postdoctoral researcher at the Columbia Climate School’s Lamont-Doherty Earth Observatory. “This tells us that the ecosystem matters in New York City, and if it matters here, it probably matters everywhere else.”

Most previous studies have calculated carbon uptake of vegetation by looking mainly at contiguous tracts of forest and grassland, but these comprise only about 10 percent of the metro area. Using newly available aerial radar imagery of New York City that mapped vegetation in unprecedented 6-inch grids, Wei and her colleagues included developed areas—the other 90 percent of the region, left out in most models. Here, they were able to pick out individual street trees, little backyard gardens, overgrown vacant lots and other small features. Outlying areas beyond the five boroughs—about a third of the 2,170-square kilometer study area—were broken down into 30-meter grids, which is still relatively fine resolution.

“Most people have assumed that New York City is just a grey box, that it’s biogenically dead,” said Lamont-Doherty atmospheric chemist Roísín Commane, who coauthored the paper. “But just because there’s a concrete sidewalk somewhere doesn’t mean there’s not also a tree that’s shading it.”

The researchers determined that tree canopies cover some 170 square kilometers of New York City, or about 22 percent of its area; grasses account for another 94 square kilometers, or 12 percent. To figure out how the greenery interacted with carbon emissions, they looked at June through August 2018, when the metro area emitted a total of some 14.7 million tons of carbon dioxide. The largest sources were the power industry and energy for buildings; road transport accounted for about 1.2 million tons. Global average CO2 levels are currently about 417 parts per million, but around New York, they routinely reach 460 or more, said Commane.

Levels would be even higher were it not for all the vegetation, especially that in the newly mapped developed areas; they accounted for nearly 85 percent of the daily carbon uptake, according to the study. On many summer days, total uptake equaled up to 40 percent of a summer afternoon’s total emissions from all sources. The scientists saw carbon dioxide levels swing up in the morning in tandem with traffic and other activities, and come down somewhat in afternoon, as grass and trees went to work.

The caveat: carbon uptake of course occurs only during the local growing season, which in relatively chilly New York runs mid-April to mid-October. Vegetation in cities situated in warmer climates probably plays a bigger role in carbon uptake, said Wei.

New York City is actively pushing to increase its tree cover. One of the team’s next projects: characterizing coverage by species, and helping figure out the relative benefits of different ones. Hardy, fast-growing oaks are a common choice for this region, but research has found they also give off a fair amount of isoprene, a volatile compound that reacts with emissions from vehicles to create polluting ozone. Sweet gums, another common tree, produce a similar amount of isoprene, but have different growth characteristics. “More trees are always going to be better, no matter what they are,” said Wei. “But we could use an assessment of which ones are the best.”

The study was coauthored by Andrew Reinmann of the City University of New York and Luke Schiferl of Lamont-Doherty.