The story below was originally published on the Climate Law Blog from Columbia University’s Sabin Center for Climate Change Law.

On September 21, the New York Times published an essay by Gabriel Popkin titled “Are There Better Places to Put Large Solar Farms Than These Forests?” Popkin describes a recently approved 4,500-acre solar project in Virginia that will remove approximately 3,500 acres of forest and asks whether such projects could be sited instead on rooftops, parking lots, and other degraded land. This blog post provides some additional information and context to Popkin’s essay.

First, only a very small percentage of solar projects in the United States are currently being sited on forested lands. While Popkin correctly notes that approximately 50% of solar energy facilities, as measured by land area, are sited in deserts, the assertion that “more than four-fifths of the rest go on farmland, forestland or grasslands” requires additional context. Specifically, it is important to understand that solar is not being sited in equal quantities on these three types of land, as farmland hosts far more solar projects (33%) than either grassland (6%) or forests (4%). For comparison, nearly 3% of solar power is currently sited in urban areas.

Second, while Popkin correctly notes that forests, like solar farms, offer climate-change benefits, the essay does not provide any information on the relative emissions benefits of forested land versus solar farms. To be clear, forests offer immense benefits that have nothing to do with carbon sequestration, including by serving as critical habitat for native flora and fauna, filtering drinking water, preventing erosion, and providing scenic and recreational benefits to millions of people. However, on the narrow but important issue of carbon dioxide emissions, an acre of solar panels appears to offset more emissions each year than an acre planted with trees can sequester. In Virginia, where the primary source of electricity is natural gas, the emissions intensity of electricity is 679 pounds of carbon dioxide per megawatt-hour (MWh), not including other greenhouse gases. According to the Lawrence Berkeley National Laboratory, utility-scale solar power produces between 394 and 447 MWh per acre per year. Thus, an acre of solar panels producing zero-emissions electricity saves between 267,526 to 303,513 pounds, or 121 to 138 metric tons, of carbon dioxide per year. By comparison, according to the EPA, the average acre of forest in the United States sequesters 0.84 metric tons of carbon dioxide per year. Thus, an acre of solar panels in Virginia reduces approximately 144 to 166 times more carbon dioxide per year than an acre of forest.

Third, Popkin suggests that siting solar projects on farmland may interfere with an “obvious an important use: growing food.” However, solar projects can coexist with and complement agriculture, including by improving pollinator habitat and allowing animals to graze between rows of panels. The Great Plains Institute has found, for example, that “utility-scale solar can be compatible with other forms of non-cultivated agriculture like pasture and grasslands.” In addition, recent research has shown that growing crops, such as tomatoes, in between rows of solar panels in hot, dry climates may increase yields by creating shade, which conserves water, increases humidity, and lowers temperatures. Likewise, the Michigan Department of Agriculture and Rural Development has determined that “the placement of structures for commercial solar energy generation … is consistent with farming operations,” provided that certain measures are taken to maintain the integrity of agricultural land at the site, including by planting pollinator habitat and conservation cover. In addition, the income that farmers can earn by leasing out parts of their land for renewable energy projects allows them to keep the rest of their land in production while insulating them against low harvest years.

Moreover, any discussion of a purported conflict between agriculture and energy production must also acknowledge that more than one-third of all corn grown in the United States is used not for food—or even to feed livestock—but for energy. In total, more than 30 million acres of farmland, covering an area roughly the size of Louisiana, are currently used to grow corn for ethanol. All of that land could be redeployed to solar energy production without affecting food production.

Importantly, converting the land currently used for growing corn ethanol to solar energy would greatly increase the amount of energy produced on that land. Indeed, an analysis from PV Magazine recently found that converting the land currently used for corn ethanol to solar power could meet all of the nation’s electricity needs. Likewise, a UK-based analysis from Carbon Brief found that “a hectare of solar panels delivers between 48 and 112 times more driving distance, when used to charge an electric vehicle, than that land could deliver if used to grow biofuels for cars.”

Based on my own calculations (below), an acre of solar panels produces roughly 40 times more energy than an acre devoted to growing corn for ethanol—and this is without taking into account the fact that electric vehicles use energy more efficiently than gas-powered cars:

Fourth, as Popkin correctly acknowledges, rooftops and parking lots are “generally more expensive to develop than forest or farmland.” However, Popkin does not explain how much more expensive it is to build solar on rooftops or parking lots. According to the National Renewable Energy Laboratory, the average cost per watt of installing rooftop solar projects is approximately 1.75-3 times as expensive as utility-scale solar. The average cost per watt of a utility-scale solar system is $0.89, compared to $1.56 for a commercial rooftop project and $2.65 for a residential rooftop project. 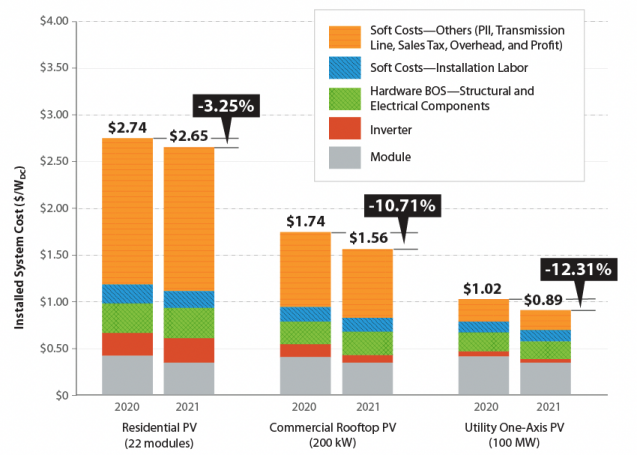 Constructing solar canopies over parking lots also appears to be more expensive than utility-scale solar. The industry publication PV Magazine has used $3 per watt as a back-of-the-envelope figure, while Energy Sage has estimated, based on data from its solar energy marketplace, that the average installation cost is $3.31 per watt. To provide one real-world example, the 12.3-megawatt solar canopy under construction at JFK International Airport will cost $56 million, or $4.55 per watt. While the construction costs of solar canopies may be offset in some cases by charging a premium for the shaded parking spots underneath, it will be more challenging to recoup such costs in places where parking is free. And these are just the installation costs; it is also more expensive to maintain small, widely dispersed units than one large system.

Ultimately, achieving net-zero carbon dioxide emissions by the early 2050s to limit warming to 1.5 degrees Celsius will require siting an unprecedented number of renewable energy facilities in a very short time. At this time, siting solar projects on forested land remains relatively rare; in the rare instances when solar is sited on forested land, those projects appear to offset more emissions on a per-acre basis than trees can sequester; the 30 million acres of farmland that are currently being used to produce corn ethanol could produce much more energy as solar farms without affecting food production; and utility-scale solar projects remain significantly cheaper to install and maintain than rooftop and parking lot solar projects.

How public housing could prevent flooding in New York City

An Opportunity for Equitable Climate Finance