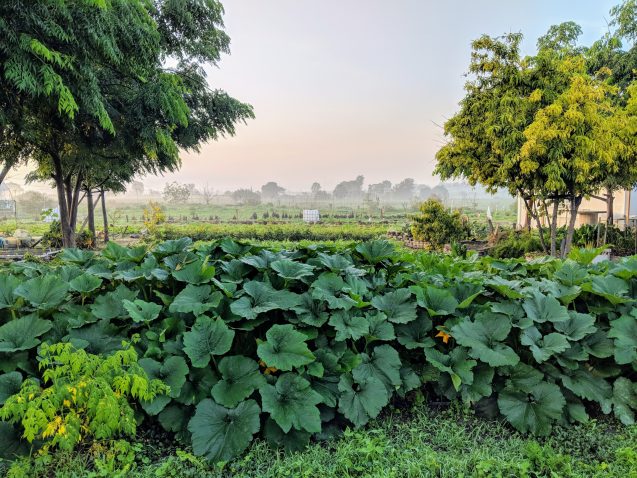 An example of regenerative agriculture at CIASPE in Central Mexico. Photo: Cassidy Pearson

Food systems were a key theme of this year’s NYC Climate Week, a welcome inclusion for proponents of climate-conscious agriculture. Scientists and farmers know that to fight climate change — and win — we need to rethink our food supply.

Globally, agriculture is responsible for about a quarter of greenhouse gas emissions — and even this huge percentage is likely underestimated. The emissions come from converting natural ecosystems to single-crop farmland, spraying the land with fertilizer and pesticides, using diesel-intensive equipment for tilling and harvesting, and more.

Farming technology has allowed us to produce over 4 billion tons of food each year, ensuring that fewer and fewer people are going hungry. But what if there was a smarter way to farm?

Scientists have long recognized that if we can just store a little more carbon in our soil, we may be able to curb the worst impacts of climate change. By being smart about how we grow our food, we can produce more food on less land — and take carbon out of the atmosphere — through a technique called regenerative agriculture. And the Farm Bill, up for renewal in 2023, could play a key role in helping this solution come to fruition.

A smarter way to farm

The Natural Resources Defense Council says the principles of regenerative agriculture include “farming and ranching with an understanding of the land’s natural resource availability, building and prioritizing soil health, reducing and eventually eliminating the use of harmful chemicals … and nurturing strong relationships with communities.”

Consider this: in a field of corn, each plant is competing for the exact same ingredients to survive. Vital nitrogen, phosphate, and potassium is depleted rapidly from the field, forcing farmers to add fertilizer to keep their crops alive. If a pest like the corn leaf aphid discovers the field, it is in heaven — no matter where it flies, there is food. This forces growers to use pesticides to ensure that the aphid never gets a chance to destroy the field.

Comparatively, consider an agriculture system with multiple crops — say beans, corn, and squash. The squash vines over the soil, preventing weeds from growing. The beans place life-giving nitrogen in the soil, and the corn serves as a support for the beans to climb. It’s no wonder that the second system requires less pesticides, less fertilizer, and less pollution.

This practice comes from Indigenous knowledge. So why and when did we stop growing our food in a way that is more effective, more diverse, and better for the environment?

Part of the answer comes from crop insurance. The 1930’s Dust Bowl hit US farmers hard, just when they were facing low crop prices following World War I and in the wake of the Great Depression. In response, Congress passed the first version of today’s Farm Bill, which ensured farmers were given a fair price for their crops by subsidizing sales.

Instead of considering what went wrong — why single-crop farmland had created the Dust Bowl in the first place — farmers were (necessarily) bailed out for one crop: wheat.

That leads us to today’s $428 billion Farm Bill. Renewed every five years, this bill is a complicated regime of revenue protection and crop insurance for farmers.

This is a cycle that spirals: by growing one crop, farmers work the land harder, depleting its resources, producing more carbon, and contributing to climate change. In turn, tornados, floods, droughts, and wildfires become more common, threatening their crops, forcing farmers to cash in on their insurance.

It’s a catch-22: farm smarter and lose money. Farm one crop, and the planet suffers, but you pay the bills.

The solution is simple: insure multiple crops on the same plot of land. And this solution already exists.

Passed nearly a decade ago, the Whole-Farm Revenue Insurance Program was added to the 2014 Farm Bill and insures multiple, diverse crops and livestock under a single plan.

One reason: Insurance agents refuse to sell these policies to farmers. They receive a commission per policy, and these multi-crop insurance policies take longer to write, giving agents less bang for their buck.

One farmer puts it, “It is not just that they don’t understand, but in my experience, they [insurance agents] are outwardly hostile to a different insurance program.”

Another reason: huge agriculture corporations like Monsanto lobby for single-crop solutions, as a huge part of their profits come from pesticide and fertilizer sales.

We need to stop blaming farms and start looking critically at those who profit from business-as-usual.

How to break the cycle

This Climate Week, policymakers and environmentalists touted regenerative agriculture as a critical solution to climate change. The Farm Bill is up for renewal next August, and talks on it have already begun, with experts estimating it will cost around $600 billion.

Policymakers (I’m looking at you, Senator Debbie Stabenow from Michigan and Senator John Boozman from Arkansas) must use this time to rewrite crop insurance policies and incentivize insurance agents to advocate for these policies. Doing so will allow regenerative agriculture to be a real possibility for the future of farming. We must stop placing the pressure on farmers to curb climate change without giving them the tools to do so.

Cassidy Pearson is a Master of Public Administration candidate at Columbia University’s School of International and Public Affairs.

California’s three-year drought continues with no relief in sight

Hollywood is coming to NBAA-BACE with three of the filmmakers involved with “Top Gun: Maverick”

Hollywood is coming to NBAA-BACE with three of the filmmakers involved with "Top Gun: Maverick"

It’s Time to Transition Away from Offshore Oil Leasing