Ice melting across Greenland this summer has been long and marked by intense melt events caused by heat waves. In mid-July, an intrusion of warm air arriving from the Canadian Arctic caused a spike in the rate and extent of melt across northern Greenland, resulting in 18 billion tons of melt in just three days, enough to submerge the whole of West Virginia in a foot of water. Then, in early September, when the melt season should have drawn to a close, a late summer heat wave caused an extensive melt surge for the first time on record. As the Arctic warms, extreme events are becoming more common, which has worrying knock-on effects for sea-level rise.

The Arctic is warming at a faster rate than the rest of the planet, and so melting from Greenland is increasing and occurring at a faster rate due to more extreme heat events. The island is currently locking up enough ice to raise sea level by 7.42 meters if it were to melt, and is losing that ice rapidly due to calving at ocean-terminating glaciers and faster ice flow into the sea. Seasonal melt is also playing a role in Greenland’s contribution to sea level — every 360 billion tons of melt accounts for 1 millimeter of worldwide sea-level rise.

Between July 15 and 18, mild air from northern Canada met with a high pressure air system over Greenland to initiate a ‘heat ripple’ in the north. A moderately extensive melt surge was captured by satellites, which visibly showed melt ponds on the ice surface. Melting across the three days of the heat ripple was 35% higher than the average for that time of year, which mirrors averages observed in 2012 and 2019 — some of the worst years of ice melt on record. In the days following the event, there was widespread coastal flooding.

William Colgan, a climatologist at Geological Survey of Denmark and Greenland, spoke with GlacierHub. “The July melt rates in Greenland were unusual for their extent in North Greenland,” he said. “The melt reached a much higher elevation than usual, to the point that it inhibited ski-equipped aircraft operations at a drilling site at near 3,000 m elevation.” Colgan attributed the melt to “an unusually large amount of warm, moist air streaming into north Greenland from lower latitudes.” 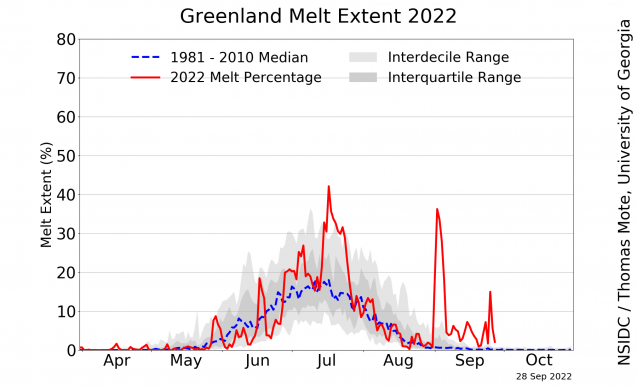 Plot of melt extent across Greenland, showing the spikes in melt extent in both July and early September. Credit National Snow and Ice Data Center.

Despite the days-long extreme events, the number of melting days recorded this summer has been near average, following similar trends observed for the year overall. The National Snow and Ice Data Center, which publishes data on Greenland melt, ranked this year as 20th in the 44-year record for total melt-day area. But this does not mean we should not be worried about extreme events.

“These sort of events really highlight that Greenland’s melt is moving into a warmer climate, as extremes become more frequent. Today’s extremes will become tomorrow’s averages, if we stay on the same high carbon emissions climate trajectory,” Colgan told GlacierHub.

During the first few days of September, 35% of the ice sheet was melting, when the historic average is only 10% for this time of year. Warm air moving northward caused this record melt event on the days when the melt season should have drawn to a close and temperatures cooled. Maximum air temperatures for the year were recorded at weather stations during the four-day event, and at the Greenland summit, temperatures exceeded the melting point for the first time in recorded history. Warmer weather was accompanied by heavy rainfall, which also fuels melting. Melting extended to the northern and eastern coasts of Greenland on September 4 and 5, as the warm and moist air moved east. 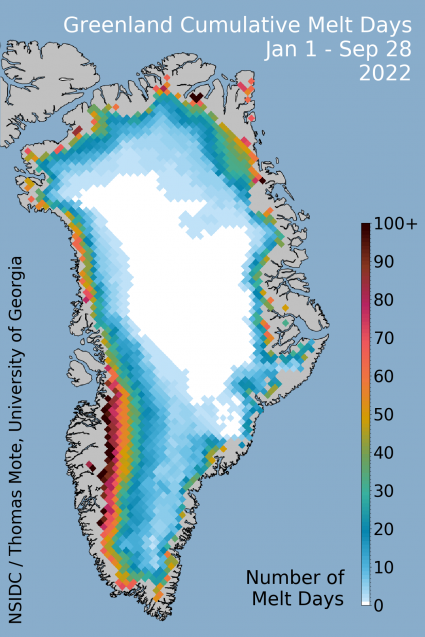 Meltwater runoff, the amount of surface water entering the ocean, peaked at just under 12 billion tons per day on September 3. This figure is more typical of July than September and is the highest recorded daily value this melting season as well as one of the top-10 highest runoff days since 1950. “Ice-sheet melt extent shot up to near 40% during a time of year when the melt is normally finished,” Colgan explained.

This is the second year running where a late season melt event has been observed. In mid-August last year, it rained at the summit of Greenland for the first time, which attracted attention worldwide. At the time, researchers said the melt event associated with the rainfall was the latest in the season they had seen. 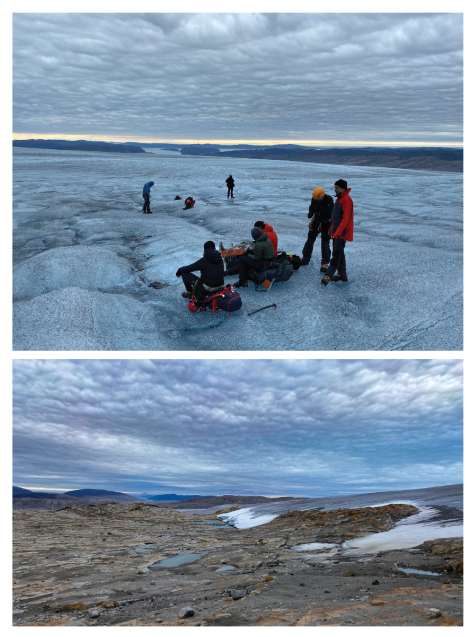 Photographs taken by a group of researchers in southern Greenland on September 2, where they experienced rain and warm winds. Credit: Mette Hansgaard/National Snow and Ice Data Center.

This unprecedented melting is occurring as Greenland’s glaciers face other new threats as well. A rare earth mineral mining site, Sarfartoq, in southwest Greenland, has been bought by Canadian company Neo. Rare earth minerals are vitally important for many uses, including magnets for electric vehicles and wind turbines, two devices that can help with cutting carbon emissions. The European Union hopes to reduce reliance on China for rare earth minerals through the mining project on Greenland. The Sarfartoq site is located close to glaciers, so there may be some possible impacts from dust, other pollutants or runoff. Southwest Greenland also experienced continuous surface melt this season, which could complicate activities near the mine.

Whatever the future of this mine, the climate impacts are continuing. Warming in the Arctic is increasing in intensity, and the summer melt season is growing longer, so events like those observed in July and September are expected to occur again in the coming summers.

“There is generally a trend of increasing ice loss from Greenland over recent decades, but there is variability between years. But when you look at the 1990s versus 2010s, for example, it is clear that the ice loss has increased,” Colgan concluded in his correspondence with GlacierHub.

Glacier calving, faster ice flow and increasing meltwater runoff means Greenland is losing ice at a worrying rate. If the entire ice sheet were to melt into the ocean, coastal cities and communities around the world would be lost underwater. Though the glaciers of Greenland are in a remote region, their increased fragility affects people and ecosystems on every continent.

Nord Stream gas leaks may be biggest ever, with warning of ‘large climate risk’

Washington on the Verge of “Cleanest Homes in the Nation”

Washington on the Verge of “Cleanest Homes in the Nation”

Chevron’s commercials just got the ‘Don’t Look Up’ treatment