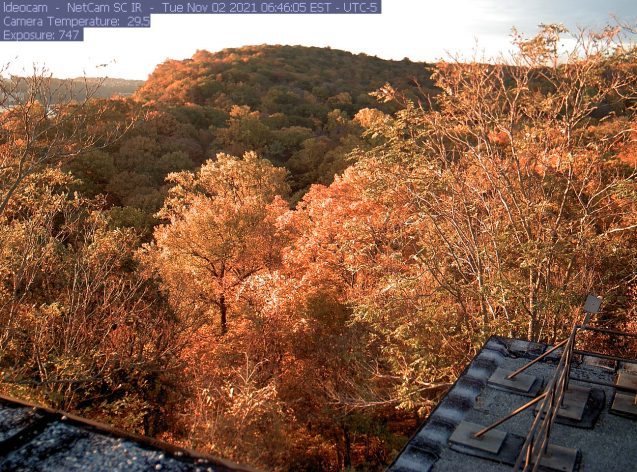 PhenoCam’s view of the fall foliage around the Lamont-Doherty Earth Observatory on November 2, 2021

Although fall officially began on September 22, the trees around Palisades, New York, don’t seem to know it yet. At the Columbia Climate School’s Lamont-Doherty Earth Observatory, a camera sits on a rooftop monitoring the nearby treetops all year long. A peek at its livestream shows that the forest is still capped in green.

Mukund Rao, a postdoctoral research scientist at Lamont, helped to install the camera back in 2020 in order to study how trees are changing with the seasons and with the shifting climate. We caught up with Rao to see what he’s learned from the PhenoCam over the past few years, and how climate change is affecting fall foliage in general.

The observations from PhenoCam showed that local leaves started changing colors a few days later in 2021 than they did in 2020. This is consistent with what scientists expect as the climate grows warmer.

The timing of when leaves change from green to a colorful mélange depends on two factors: temperature and light.

Cold temperatures tell the tree that it’s time to shut down for the winter. It stops making chlorophyll, the stuff that makes leaves green, and as a result, other underlying pigments — like red, yellow, and orange — finally get a chance to shine.

Rao thinks that because 2021 was slightly warmer than the previous year, the trees didn’t get the signal to stop making chlorophyll until later, so the leaves held onto their green coloring longer.

Another trend the PhenoCam has picked up on, and that other scientists have observed, is that the period of time between the leaves becoming bright and colorful and then dropping is getting shorter.

“​​Earlier the peak fall colors would last for maybe a week and a half, and now it’s condensing into a shorter and shorter period,” said Rao. He estimates that in 2020, it took about 11 days for the trees to go from peak colorfulness to no leaves; in 2021, the transition appeared to be closer to 9 days. However, he noted that there is a lot of variation between individual trees.

Scientists don’t know for sure why the colorful phase is getting shorter, but Rao offered one potential explanation. In the fall and winter, lower levels of sunlight mean it’s not very beneficial for the tree to waste energy making chlorophyll and maintaining its leaves — so it drops them. Warmer temperatures may be delaying the onset of color changes, but since light levels are not changing from year to year, the trees shed their leaves around the same time every year. The period in between is shortened due to the warming temperatures.

Stressed trees do not produce fall foliage that’s as vibrant as a healthy tree.

For example, during drought years, “fall foliage colors are not as bright compared to wet years, where the trees were able to produce a lot of sugars, and where they had a nice growing season and they were quite happy.”

Droughts can also cause trees to drop their leaves earlier in the season, and to skip the colorful phase altogether, transitioning straight to brown before quickly falling off.

As the planet continues to get warmer, dry regions are expected to get drier, and wet regions will receive more precipitation. These trends could impact the aesthetics of fall foliage, in addition to raising concerns about agriculture and water supplies.

Adding up these weather and climate factors together with the PhenoCam observations, Rao expects that peak fall foliage around Palisades, New York, will happen between October 25 and 30, and that the leaves will have dropped by November 10.

But leaf lovers may not want to get their hopes up too much — Rao says that due to the summer heat waves and local dry spells, the fall foliage may not be very bright this year.

The rebirth of Hiware Bazar

Curb Neonic Use to Save Bees—and Farmers

Curb Neonic Use to Save Bees—and Farmers

What's 'nature-rinsing,' and how is it different than greenwashing?