Otters the Size of Lions Once Roamed the Earth

Otters the Size of Lions Once Roamed the Earth

Scientists have identified a new species of long-extinct otter in Ethiopia that was the size of a modern lion. Weighing an estimated 200 kilograms, or 440 pounds, it is the largest otter ever described; it would have rubbed elbows, and possibly competed for food, with our much smaller ancestors when it lived alongside them 3.5 million to 2.5 million years ago. A paper describing the animal just appeared in the French scientific journal Comptes Rendus Palevol, along with a short nonscientific youtube video.

“The peculiar thing, in addition to its massive size, is that [isotopes] in its teeth suggest it was not aquatic, like all modern otters,” said study coauthor Kevin Uno, a geochemist at the Columbia Climate School’s Lamont-Doherty Earth Observatory.  “We found it had a diet of terrestrial animals, also differing from modern otters.”

Current otters weigh 4 to13 pounds for the Asian small-clawed otter, up to about 70 pounds for the South American giant otter and 100 pounds for the North Pacific sea otter. Several giant otters are known to have populated Eurasia and Africa from about 6 million to 2 million years ago. Among these, the extinct genus Enhydriodon is the best known because its remains, although fragmentary, have been found in many locales, particularly in eastern Africa. The newly described species has been named Enhydriodon omoensis, after southwestern Ethiopia’s Lower Omo Valley, where it was uncovered. 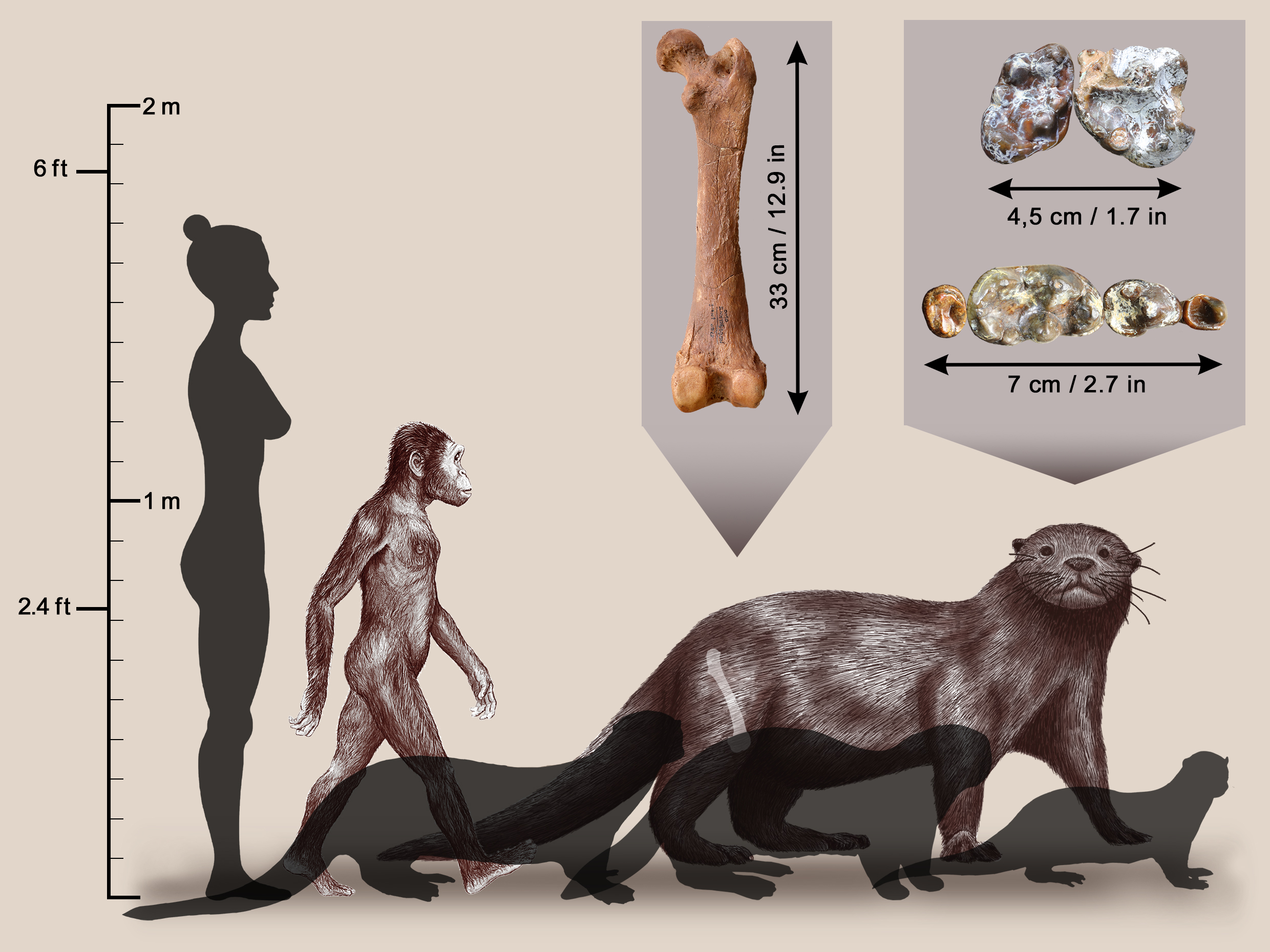 The fossils were discovered by several international excavation teams over the years. The authors of the new study, led by Camille Grohé of the University of Poitiers, based their body mass estimates on the dimensions of the animals’ teeth and femur.

Traditionally, otters of the genus Enhydriodon have been considered semi-aquatic, feeding on mollusks, turtles, crocodiles and catfish, all common in African freshwater environments. Uno tested this idea by analyzing stable isotopes of oxygen and carbon in the tooth enamel of Enhydriodon omoensis.

The relative values of stable oxygen isotopes can give an indication of the habitat occupied by an animal. Presumably, values in the fossil otter should have been close to those of fossil hippos or other semi-aquatic animals. Instead, the giant Omo otter had values similar to those of terrestrial mammals, in particular big cats and hyenas from the Omo fossil deposits.

Carbon isotopes in teeth can provide information on the type of prey a creature consumed. These revealed that Enhydriodon omoensis was able to hunt prey that consumed a wide variety of terrestrial plants, from tropical grasses to vegetation from trees.

The authors plan to sample African otter fossils more widely to conduct studies of tooth enamel and the shape and structure of long bones, in order to understand what place these gigantic otters occupied in past ecosystems, and the causes of their extinction, about 2 million years ago.

Adapted from a press release by the University of Poitiers.