Holes in sea ice provide the perfect hunting ground for polar bears looking to catch their main food source—seals. So when rising temperatures cause sea ice to melt, polar bears’ existence is threatened, making them the poster species for many climate change reports and documentaries. While every population of polar bears is threatened by the loss of this sea ice, some have developed adaptations to survive low-ice seasons. In southeast Greenland, researchers have discovered a unique subpopulation of polar bears that have found a way to live in an area with low sea ice by hunting on glacial mélange—a floating mixture of icebergs that have calved from glaciers, sea ice, and snow that forms at the base of glaciers and survives the warm season.

The discovery was published in June in the journal Science by an international team of Arctic scientists. The population is isolated and genetically distinct from other groups of polar bears and survives in fjords that are free of sea ice more than two-thirds of the year.

A typical image of a polar bear on a sheet of melting sea ice in the Arctic. Most polar bears rely on sea ice for hunting, and climate change is threatening this vital habitat. Photo: Gary Bembridge/Flickr

The Arctic Ocean is a mix of liquid and frozen seawater at the North Pole. This area and the adjacent seas around it provide a critical, shrinking habitat for polar bears. Polar bears use sea ice to cross long distances and hunt for ringed seals, their preferred prey, or other seals and marine mammals. Typically, polar bears wait by holes in the sea ice for their prey to surface for air so they can snatch them out of the water.

While the sea ice in the Arctic Ocean used to regain the mass it lost in summer during the cold, dark winter months, it has been steadily declining for decades. It has lost an average of 27,000 square miles of ice per year since 1979. This is bad news for species that rely on sea ice, like polar bears, that are now being forced to spend more time on land and fast for longer periods of time. With sea ice breaking up and retreating earlier in the summer, many polar bears have no or minimal access to food during the warmer months, which affects both their physical and reproductive health.

According to the new study, an isolated polar bear population on the southeast Greenland coast supplements the low-ice season by relying on glacier ice for hunting when the sea ice is gone. Unlike sea ice, glaciers form on land, whereas sea ice forms and melts in the ocean. Glacier mélange is a floating mixture of icebergs calved from glaciers, snow, and freshwater ice that forms at the base of glaciers that terminate in lakes and rivers in fjords—narrow valleys carved by ancient ice movement. Since glaciers do not fully melt in the summer, they provide a hunting ground for this subpopulation when sea ice is unavailable. 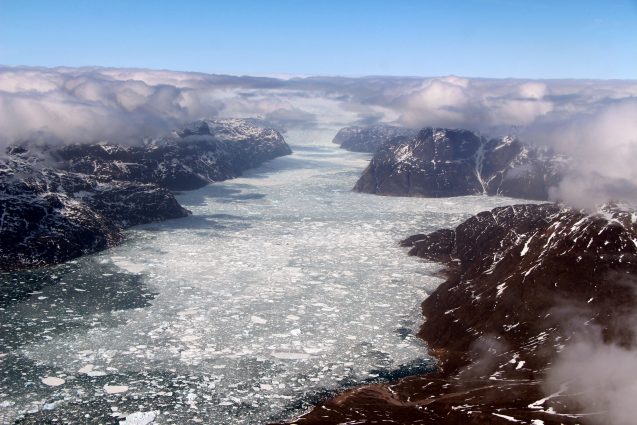 A fjord in Greenland with proglacial mélange. A subpopulation of polar bears in southeast Greenland hunt on glacier ice rather than sea ice, as discovered in a recent study. Photo: NASA’s Marshall Space Flight Center/Flickr

Lead author Kristin Laidre, an associate professor in the School of Aquatic and Fishery Sciences at the University of Washington, was conducting a decade-long survey of Greenland’s east coast polar bears with her team when they realized they might be looking at two subpopulations rather than one. “We were assessing what we thought was a single subpopulation on Greenland’s 1800-mile-long east coast when we made this wholly unexpected finding,” Laidre said in an interview with GlacierHub. The decade-long survey tracked the movement, genetics, and demographics of polar bears along Greenland’s east coast. They also surveyed Indigenous subsistence hunters from east Greenland and incorporated their traditional ecological knowledge into the study.

Through genetic and behavioral data, Laidre and her team realized they had found a new subpopulation of polar bears on the southeast coast of Greenland—the “most genetically isolated polar bears in the world,” according to Laidre. In other words, while those bears are still the same species as other polar bears, they are genetically and demographically different from other subpopulations. Genetic diversity is important for species because it allows them to adapt to changing environments. While more research needs to be done on the population, a combination of genetic diversity and behavioral adaptation has allowed these bears to hunt on glacier ice during seasons of low sea ice to supplement their diets.

Laidre emphasized that this research does not mean that the bears are not threatened by the loss of sea ice. “Glacier ice may help small numbers of polar bears survive for longer periods under climate warming, but it is not available for the vast majority of polar bears,” she explained. In the long run, she notes the importance of studying this population and other polar bears to understand where Arctic polar bears might be able to survive and how genetic diversity can help other species threatened by climate change.

How a conservative US network undermined Indigenous energy rights in Canada