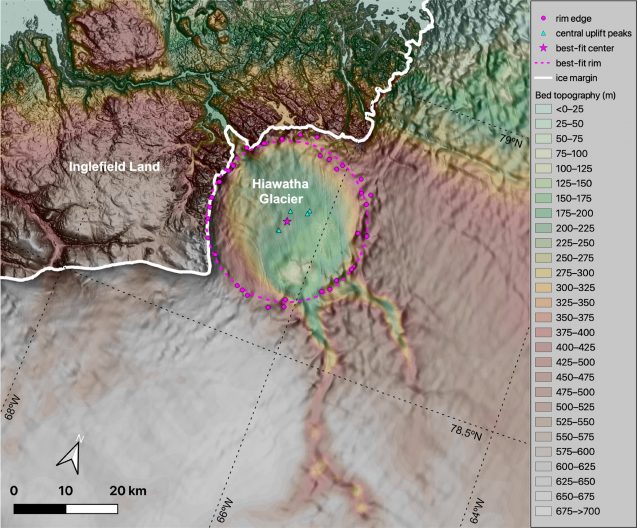 In 2018, researchers discovered a massive, 19-mile-wide crater concealed beneath the Greenland ice sheet. A March 2022 study used argon-age dating of sand grains to determine that the meteorite impact occurred close to 58 million years ago (Ma). The study, authored by Gavin G. Kenny from the Swedish Museum of Natural History and his team, details the initial discovery of the crater and the methods used to determine the time of impact.

This impact stands apart from others of its kind: it was only discovered by an ice penetrating radar used to better understand the surface beneath Greenland’s Hiawatha Glacier. That was in 2018. Before Kenny and his colleagues began collecting data, they had to travel long distances to arrive at the impact’s frozen, remote location. The research came with high expenses, and the team spent many hours collecting sand grains carried by streams fed with glacier meltwater from the impact site.

Researchers then measured the ratio of two isotopes of argon, Ar-40 and Ar-39, in the sand grains — a painstaking process because Ar-40 makes up about 99.5% of all argon found on Earth. Establishing the argon ratio allowed the researchers to determine the age of the surrounding sand grains using an equation. When Ar-40 is exposed to radiation, it decays to Ar-39; the remaining concentration of Ar-40 is measured, and a greater concentration of Ar-40 indicates a greater age. All grains tested were more than 50 million years old. This placed the impact squarely in the geological period known as the Paleocene.

The scientific community previously believed that the impact occurred towards the end of the Pleistocene, 1 million years ago, when the Greenland Ice Sheet existed. However, the study’s new dating evidence has determined that the impact occurred during the Paleocene. The Paleocene (66-56 million years ago) is characterized as a period of mountain building when the Earth was home to small herbivorous mammals, and apparently lacked dinosaurs. At that time, Greenland was covered by a temperate forest, rather than the thick layer of ice that now covers the entirety of the impact area.

The discovery of the crater, only four years ago, was the product of a hunch. When Danish geogenetologist Nicolaj Larsen studied detailed maps of Greenland, he noticed a circular structure beneath the glacier, prompting further investigation. He then picked a team of researchers and they began the trek to Greenland. The crater that they found was the first to be discovered beneath a continental ice sheet. In general, craters on Earth disappear quickly, and for those that last, it is often difficult to give a precise age. Thus, the precision with which argon dating was used beneath the Hiawatha Glacier is remarkable.

A prior study, published in 2018 by Elizabeth Silber, examined the possible time of the Hiawatha impact before argon dating was available. Her primary research goal was to determine whether the impact occurred before or during the Pleistocene, or the Last Glacial Period, which took place 2,580,000 to 11,700 years ago. This work by Silber, a geoscientist at Western University in London, Ontario, paved the way for research in the years following.

Speaking to GlacierHub via email, Silber discussed the challenges she faced during her research. She said “[the] Hiawatha impact structure is somewhat muted relative to what we would expect from a subaerial impact.” Her statement indicates that the crater is shallow and has disrupted peak rings. Peak-ring craters have rings surrounding the center of the crater.  As a result, it is not easy to determine whether the structure of the crater is due to “preferential and slow erosional rates (if the impact crater formed when there was no ice sheet in that region), or because a thick ice sheet absorbed some of the impact energy.” Both possibilities would cause the crater to have “less pronounced morphological features.” The models Siber used showed both scenarios (pre-Pleistocene or Pleistocene) as being equally plausible, so the new study published using argon dating was “very exciting, as this age estimate is consistent with our modeling results pointing to an older impact structure,” Siber said.

This raises the question: if the impact took place much earlier than previously believed, how does this change in its timing alter its perceived impact on global climate? Since the original age estimate placed the impact well within the Pleistocene, it was previously believed that the impact might have been related to the onset of the Younger Dryas cold period about 11,000 years ago. The Younger Dryas was a period of extreme cooling that reversed global warming trends temporarily; it is unknown what caused this event, but placing the Hiawatha impact at 58 million years ago rules out any correlation between the two.

However, the impact occurred long before the Pleistocene, and it is no longer a possibility that the impact affected human life. More research is necessary to concretely identify specific effects, but it is likely that it had a considerable effect on global climate given the size of the crater. Many agree that the size of the meteorite alone would have flung large quantities of water vapor and debris into the atmosphere upon impact, prompting a period of global cooling. Additionally, the timing of the impact occurred within the timeframe of the Paleocene Carbon Isotope Maximum, a time in which there was a peak in carbon-13 presence in the atmosphere. High values of carbon-13 in the atmosphere are further evidence of a large meteorite impact that would cause a disruption in normal carbon-13 values.

It is important to understand ice behavior in previous time periods in order to better understand their current effects, as Liam Colgan told GlacierHub. Colgan is a climatologist and editor for the Journal of Glaciology with a focus on glaciers as indicators of climate change. He was not affiliated with the recent study. “What happened in the past, still affects the ice sheet today,” he said. The Last Glacial Period (or Pleistocene) ice properties are rather different from today’s Holocene ice properties.”

According to Colgan, understanding the depths at which ice from the Last Glacial Period transitions into the more recent Holocene ice is essential in predicting ice behavior, a crucial question for projecting future sea level rise. Though recent research places the impact in the Paleocene, the resulting difference in topography likely affected the ice movement seen today.

The use of glacier meltwater to acquire sand samples, as well as the use of argon dating, is a great success in research in remote and difficult terrain. These tactics can be applied to current crater analysis, allowing us to better understand the history of our earth and how to better anticipate the impacts of future events.