GlacierHub recently sat down with well-known photographer Ian van Coller to discuss his new book of photography, The Last Glaciers of Kilimanjaro — a reinterpretation of a past project where he summited the dormant Tanzanian volcano to document its rapidly disappearing glaciers. In his new book, now in black-and-white, van Coller’s photography asks critical questions about the relationship between art and science and interrogates the loss caused by climate change through subtle, yet ethereal landscape shots of glaciers that exist on the largest free-standing mountain in the world.

In the Zoom screen during our virtual conversation, van Coller holds his new book, which stretches from the length of his shoulders to his hips. He flips through the heavy, glossy pages until he stops and turns the book around to face the screen.

“Yeah, this one is probably my favorite,” he says, looking down at a black-and-white landscape photograph of the Eastern Ice Field on Mount Kilimanjaro. The photograph is his, from a 2016 trip to the summit. “It reminds me of being a kid and seeing Superman’s castle in the movies,” he tells GlacierHub. “It’s architectural. It’s monumental.” 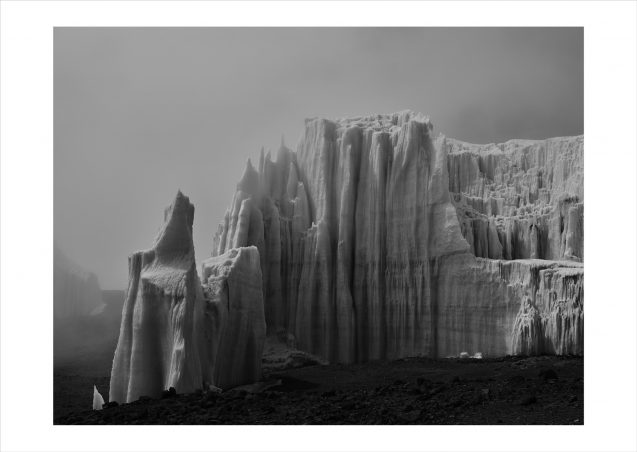 This photograph of the Eastern Ice Field, featured in his new book “The Last Glaciers of Kilimanjaro,” is van Coller’s favorite of the collection. Courtesy of Ian van Coller

Originally from Johannesburg, South Africa, van Coller spent his early career photographing political unrest and cultural issues in the apartheid and post-apartheid eras. When he moved to the U.S. in 1992 to pursue a Bachelor of Fine Arts degree from Arizona State University and then a master’s from the University of New Mexico, his artistry transitioned, focusing on environmental issues. His most recent work, which he holds up to the computer screen, is a re-interpretation of a previous book from 2016 titled “Kilimanjaro: The Last Glacier.” After hiking to the summit of the mountain, he created the 2016 book with pages 50-inches tall to document what will soon be lost due to climate change.

Van Coller’s work has been widely recognized and featured in significant museum collections, including the Philadelphia Museum of Art, the Getty Research Institute, the Metropolitan Museum of Art, the Library of Congress, and the South African National Gallery. Prior to his expedition to Kilimanjaro’s summit, van Coller spent three years as part of the Last Glacier collective, documenting the disappearing glaciers in Glacier National Park in Montana. There, he was joined by two printmakers, Todd Anderson and Bruce Crownover, who produced their own work. “We wanted to document a particular space in time from the viewpoint of three different artists,” van Coller said, who currently lives in Bozeman, Montana, where he is a professor of photography at Montana State University.

In 2015, van Coller stumbled across a photograph of one of Kilimanjaro’s glaciers which piqued his curiosity. “It was this really amazing image of this sort of castle-like ice,” van Coller said. “I had been to quite a few glaciers already, and it was different from anything I’d ever seen.”

Rising above the Tanzanian grasslands, Mt. Kilimanjaro is one of three areas on the African continent with glaciers. It’s also become an icon for climate change, having lost 84 percent of its ice since 1912 — a loss that is credited to warming air temperatures and decreasing frequency of snowy and cloudy days.

The photo van Coller found was taken by Douglas Hardy, a geoscientist at the University of Massachusetts Amherst, who studies Kilimanjaro’s glaciers. A few days after coming across the photo, van Coller reached out to Hardy, asking if he would consider letting him join his next annual research trip to the summit. Within weeks, the two had scheduled a trip where Hardy would continue his research on the effects of climate variability on mountain ecosystems, and van Coller would take a series of photographs documenting the disappearing glaciers. The 2016 trip would continue to be a source of inspiration for van Coller.

The following interview has been edited for length and clarity.

GlacierHub: Take me to the top of Mt. Kilimanjaro. What was it like in 2016?

Ian van Coller: It’s a hike and there’s nothing technical about it at all. It’s a matter of endurance, strength, and your ability not to get altitude sickness. I don’t generally like people to carry my camera gear, but we hired porters, who were a lot of help.

We were there for four nights and five days on top of the mountain. We got to camp right next to the northern ice field, which is the largest ice body still up there — about 50 feet thick. From there, I hiked to the other ice fields on the summit each day, which are not moving glaciers. Unlike traditional glaciers that move down a slope, Kilimanjaro’s glaciers just sit on top of the mountains, dissipating into the volcanic ash. 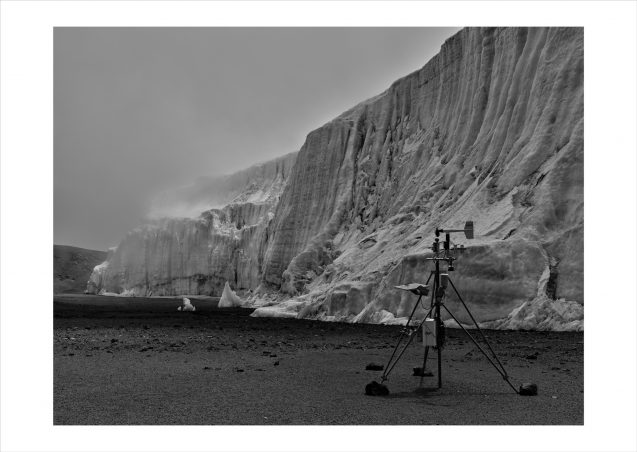 A photograph of a glacier on Mt. Kilimanjaro, featured in van Coller’s book “The Last Glaciers of Kilimanjaro.” Courtesy of Ian van Coller.

GH: How did you prepare for this trip?

IVC: I do a lot of research before I go places and I look at a lot of pictures so that I have a sense of what I might encounter. I also often am able to get some funding from a university, which requires me to write a grant and articulate what I intend to picture.

I have a long history of doing portraiture work, and I’m interested in colonial legacies. So on the 2016 trip, I was interested in the men who helped us get up to the top of the mountain and what their livelihoods mean when the glaciers are gone. In my first book on the glaciers of Mt. Kilimanjaro, I took formal portraits of these men and then paired them with formal portraits of the glaciers. When I returned from the trip, I made a book that opened to 250-inches, with 40 by 50-inch pages. As you flip through the color photographs, a portrait of a porter is paired with a portrait of the glacier.

GH: In “The Last Glaciers of Kilimanjaro,” your recent reinterpretation of this earlier book,  you exclude the formal portraits of the local men and your photographs are in black and white, among other changes. Why is this?

IVC: Part of it can be explained by the fact that I am a privileged white male, the legacy of growing up in South Africa, and the power dynamic that a camera brings, which I feel is a tenuous line to tread. At this point in time, I didn’t want to take away from the landscape that I’m trying to focus on.

In the last couple of years, I’ve become really interested in ideas of the sublime from original notions of the Victorian era. I’m very influenced by Alexander von Humboldt and the Victorian writers and poets and artists who came after, and the juncture between art and science. But over time, that has transformed into our contemporary Instagram culture as photographs of oversaturated, pretty sunsets.

As a photographer and as an artist, I try to connect with nature and the earth. I can do this best by representing a landscape in a detailed, subtle way. When I went back to the project, I had a lot of images that I hadn’t used in the original book, and I reinterpreted them in a very kind of dark, foreboding, sublime manner. This is why I gravitated more to black and white. 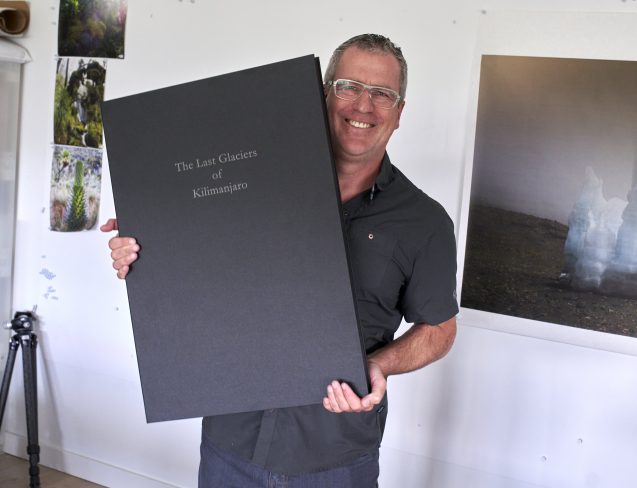 Van Coller holding “The Last Glaciers of Kilimanjaro.” The book opens to 26″x40″ and is printed and designed by Ian van Coller and bound Drum Leaf and John DeMerritt. Courtesy of Ian van Coller

GH: What message do you aim to send through your photographs?

IVC: I want to primarily evoke empathy for the natural world. That’s my primary driving factor in everything I do now. I don’t have a lot of positive views about our future as humanity, but I hope to document the changing landscape and record what we’ve lost. We have these places, they’re changing, and they’re incredibly beautiful. So I hope to show how beautiful they are, why we should care about them, and why we should save what we do have.

GH: Art as a form of climate action is a growing field. Do you think your work includes a call to action?

IVC: I don’t have the personality of an activist. I’m actually a total recluse and I avoid people if I can, but I think my role is making art and showing its beauty. I do a lot of artist talks and I just state things as I see them. I also know I’m as complicit as the rest. Every time I get on a plane to fly to Tanzania, I feel an incredible sense of guilt. But I try to justify that to myself by going and making this work. I do think that people have different roles to play in getting the message across and my message is making the art. 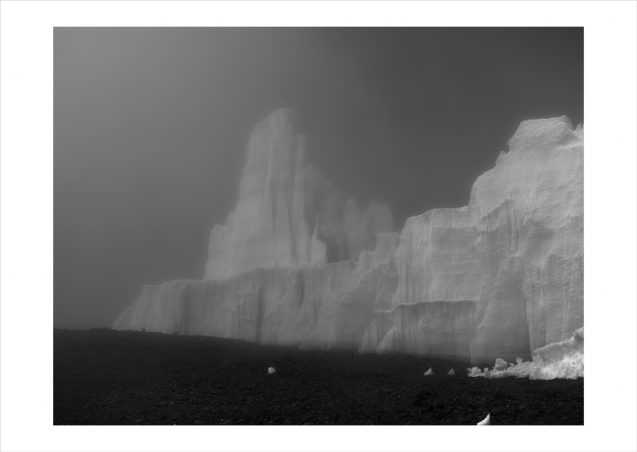 A photograph of a glacier on Mt. Kilimanjaro, featured in van Coller’s book “The Last Glaciers of Kilimanjaro.” Courtesy of Ian van Coller

GH: You’ve often paired your photographs with the research of scientists studying the area. Why is this important to you?

IVC: I want to move beyond just the photograph of a melting glacier, which is something we see a lot of. We see a picture of a beautiful glacier that’s melting, and that’s sad, but what’s the entry point beyond that? I realized I didn’t know a lot and I wanted to learn more. So I became friends with the scientists. In most of my books, I include essays by a scientist, which allows them to interpret the photos as they wish.

GH: Who is your audience?

IVC: Some universities have large special book collections that actively collect books that I make, and show them to students. Stanford, for example, has almost every book I’ve made, and also the Beinecke Rare Book and Manuscript Library at Yale has a bunch of my books. There are other collections, which are much less active, like the original “The Last Glacier” book is at the Metropolitan Museum of Art. It was on display for four months and now it’s in the archive somewhere. But I take every opportunity I can to share my work. I’m active on Instagram and Facebook, and I have exhibitions. Whatever ways I can show the work I do.

GH: What can photography do that science cannot?

IVC: Science didn’t used to be this way. Alexander von Humboldt was an artist and he was also a scientist. I feel like science has become narrower and narrower and narrower and it’s become so inaccessible to a larger audience. I’m a university professor and I pick up these scientific papers and the language is really hard. So someone who is not an academic is not going to go out of their way to read a scientific paper on a specific glacier. I think that art helps bridge that gap. My intent in collaborating with scientists is to help make scientists artists again. 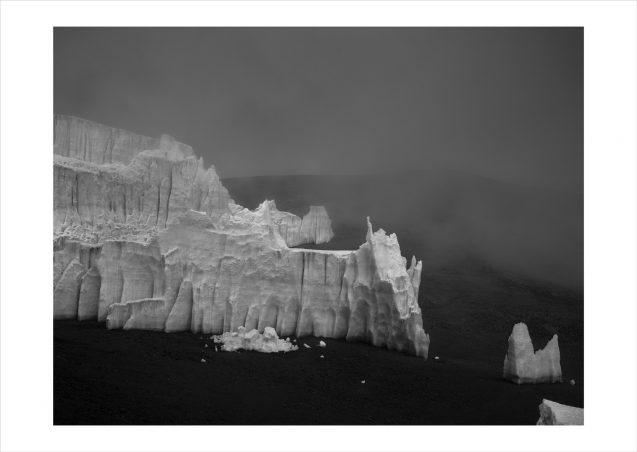 A photograph of a glacier on Mt. Kilimanjaro, featured in van Coller’s book “The Last Glaciers of Kilimanjaro.” Courtesy of Ian van Coller

A video flip-through of “The Last Glaciers of Kilimanjaro” can be found here.

Back to my roots: A story of logging and conservation on Vancouver Island

8 items you should pack for AirVenture

8 items you should pack for AirVenture