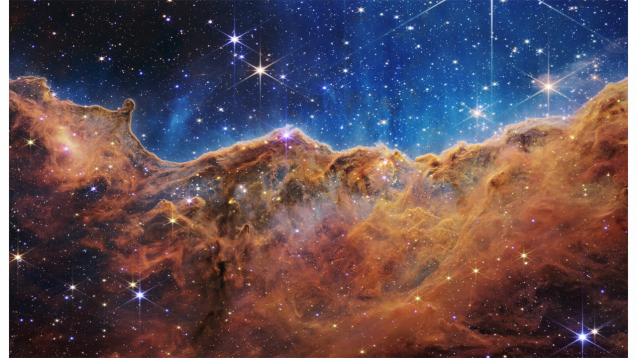 The James Webb Telescope’s view of a star-forming region in the Carina Nebula. Photo: NASA

You likely have seen some of the stunning imagery that was unveiled yesterday by NASA and the Space Telescope Science Institute. You can download and explore five images and an enormous amount of related content at webbtelescope.org.

I ran a pop-up Sustain What webcast of the livestreamed event that you can watch here if you missed it:

The Webb Telescope, like Hubble before it, is mind blowing on several levels, both as a technical achievement and for the bravura nature of the decades-long policy, funding and scientific push required to sustain such grand projects. Read “Telescope Time Machine” by my Bulletin colleague David Kerley for that back story, centered on James Webb. Kerley also posted on the technical aspects of the satellite’s orbit that make all of this possible.

The first batch of images, as yesterday’s NASA event and an earlier teaser made clear, are breathtaking in at least three ways: for their scientific significance, for the sheer aesthetic wow factor, and for the sense of wonder and humility they engender.

During the event, project scientist Klaus Pontoppidan explained how a years-long process winnowed 70 proposed targets to this handful “that would create the most beautiful images, highlight the four science instruments and highlight the main science themes for Webb.” Yes, there’s salesmanship at NASA, as at every agency.

But this really is a profound new frontier mission taking humans back in time and far away with unprecedented detail and data.

It’s clear that the hundreds of scientists running and contributing to this mission and the related research efforts are not just here for the intellectual challenge.

Below is a pair of images that convey what I see as two complementary components of the space agency’s mission: understanding and protecting the home planet and driving fundamental discovery of the world beyond Earth orbit. The image of pre-war Kiev at left was taken and tweeted in 2017 by NASA astronaut Randy Bresnik from the International Space Station. At right is Webb’s First Deep Field image, revealing a gallery of galaxies some 4.8 billion light-years from Earth. 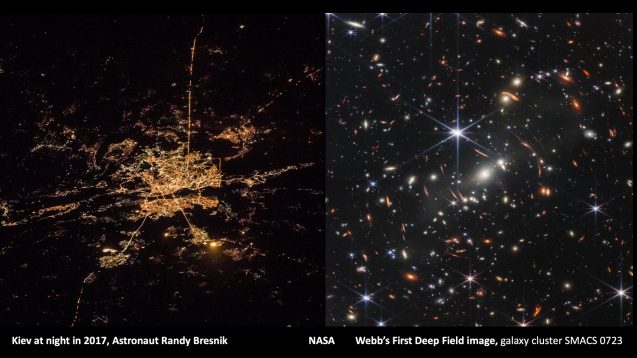 My reporting on NASA has mainly focused over the decades on the instruments and initiatives pointed back at the home planet, not up. Both missions are necessary to building a sustainable future, to my mind.