In the thin, cold atmosphere of Mars, temperatures fall low enough to freeze molecules that are often gases on Earth. While scientists have known for decades that there are deposits of carbon dioxide ice on Mars’ South Pole, a recent study found that these deposits form glaciers that flow into basins and survive warm periods, just like their water-based counterparts on our home planet, Earth.

The study was published in April in the Journal of Geophysical Research by a team of planetary and ice modeling scientists. 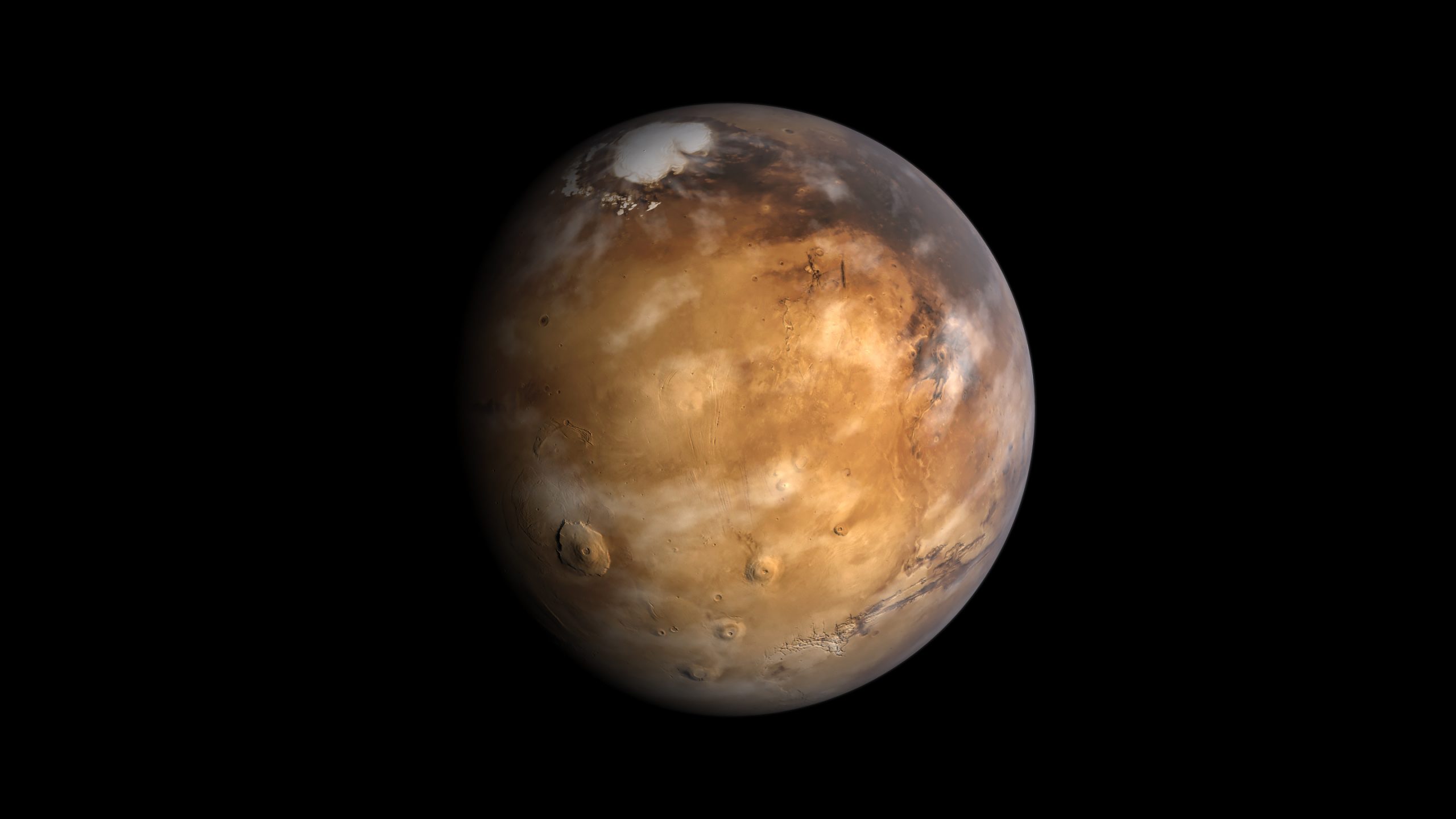 Mars, the fourth planet in our solar system, has ice caps at its north and south poles made of water and carbon dioxide ice. Photo Credit: Kevin Gill/Flickr

Similar to Earth, Mars has ice caps at its poles that accumulate ice during the winter and lose ice during the summer. However, unlike Earth, winters on Mars can get as cold as -220℉ at its poles—cold enough for molecules that are always gaseous on Earth to freeze. For example, carbon dioxide—which is a gas at room temperature—freezes at -109℉. Scientists have found that about 1% of the volume of the Martian ice cap comes from deposits of frozen carbon dioxide (dry ice) that accumulate during the winter at each pole, while the rest of the ice cap is composed of frozen water.

The Martian southern ice cap has been of particular interest to scientists due to its mixed composition and distribution of carbon dioxide ice. Courtesy of I.B. Smith

Scientists like Isaac B. Smith, an assistant professor of earth and space science at the Lassonde School of Engineering at York University, are now modeling the deposits of carbon dioxide ice to understand how they were formed. Smith took part in a 2011 study that used radar technology to identify carbon dioxide ice deposits up to one kilometer thick on Mars. At the time, Smith says, “no one could explain the distribution, but we acknowledged that the ice was in basins,” which meant the ice did not have to hold its own shape, so ice strength was less important. Smith has also been part of research measuring the strength properties of carbon dioxide ice.

This research set the stage for the April study, which found the deposits on the Martian South Pole identified in 2011 were created by carbon dioxide ice flowing as glaciers into the basins.

While scientists knew that the deposits could not have come from atmospheric circulation and storms alone, proving that the carbon dioxide ice deposits came from glacier flow was not simple. Smith says that he first found that the Mars ice matched “several features that we see on terrestrial water glaciers,” including the topography and the profile as well as the presence of compression ridges (linear ridges that form when glaciers follow gravity). This feature analysis was important for laying the groundwork to support the view that these ice deposits may have come from glacial flow, but it was not enough to declare it definitively.

Smith then teamed up with 3D glacial modelers to adapt an Earth-based glacier modeling software for Mars—which meant changing model parameters such as gravity, thermal flux, and type of ice. They were able to use this modeling software to “grow the glaciers from scratch,” according to Smith, and the output of the model “closely matched the distribution of carbon dioxide ice” measured in the NASA Mars space missions. 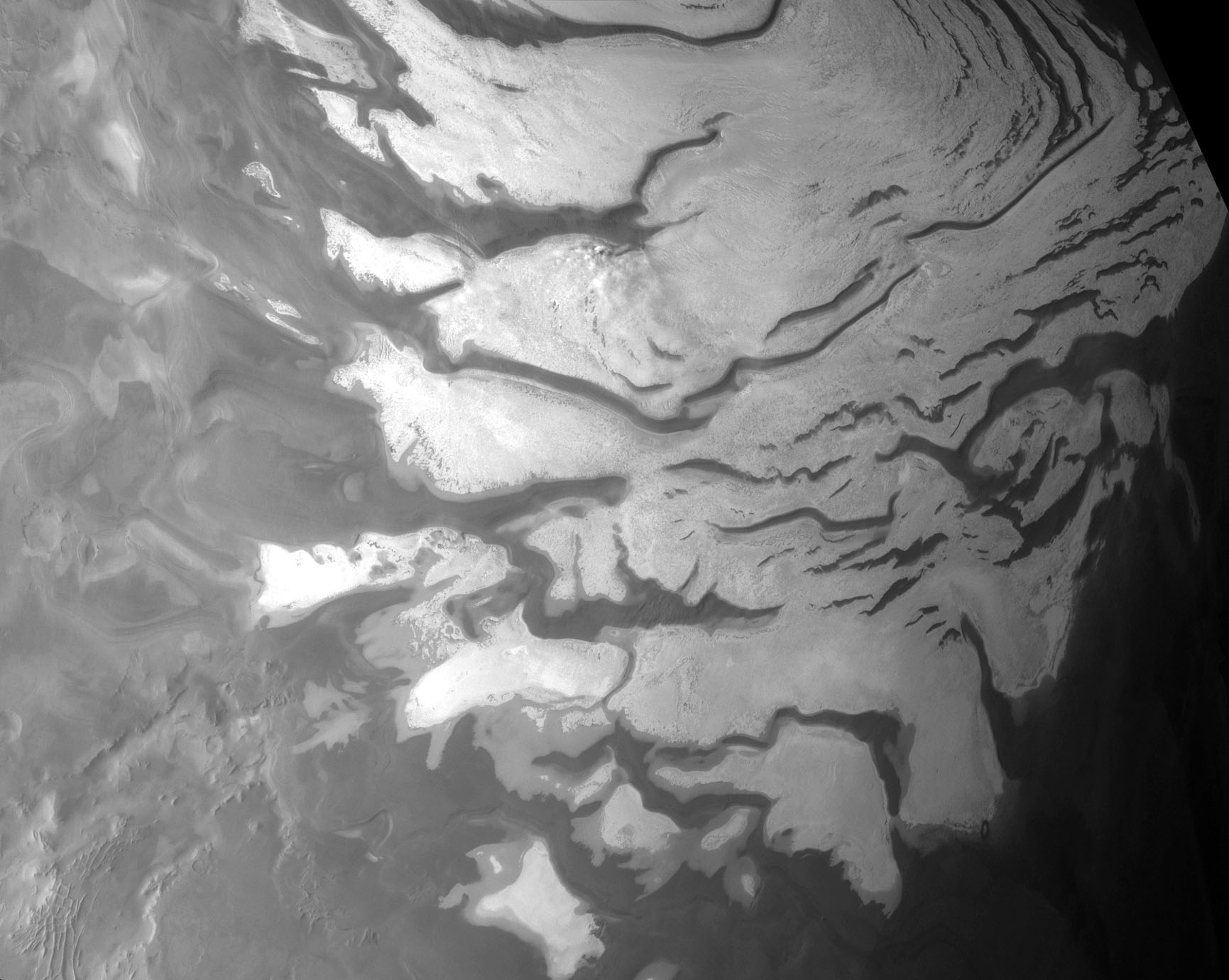 A close-up of the southern ice cap taken by NASA. Courtesy of I.B. Smith

The feature analysis and spatial modeling done by Smith and his team explain the distribution of carbon dioxide ice in these basins much better than previous models of precipitation and other atmospheric effects. Since carbon dioxide ice has a lower viscosity (internal friction) than water ice, Martian carbon dioxide glaciers are able to flow much faster than terrestrial glaciers of frozen water. The slopes on the Martian South Polar ice cap are steep enough to direct glacial carbon dioxide flow into the basins, creating the thick deposits identified in 2011. The study also found that these deposits are able to survive warm periods (summers) on the planet due to their thickness since only the uppermost sections of the ice undergo sublimation, a process where frozen molecules transition directly to a gaseous state, skipping the liquid state entirely.

Understanding the distribution of the carbon dioxide ice deposits at the Martian southern ice cap solves a decade-long riddle of the origins of this mysterious, anomalous ice. The study highlights that there are many kinds of ice and glaciers in the solar system, such as the methane and nitrogen glaciers found on Pluto.

More research needs to be done on alternative ices in our solar system; Smith says the first step is to have more laboratory measurements of exotic ices so that “we can properly model their behavior when we find them.” Understanding the other glaciers and ices in our solar system may help us better understand our own glaciers here on Earth and appreciate the diversity of ice that lies beyond our atmosphere.

California lawmakers are ready to decarbonize the shipping industry. The technology isn’t there yet.